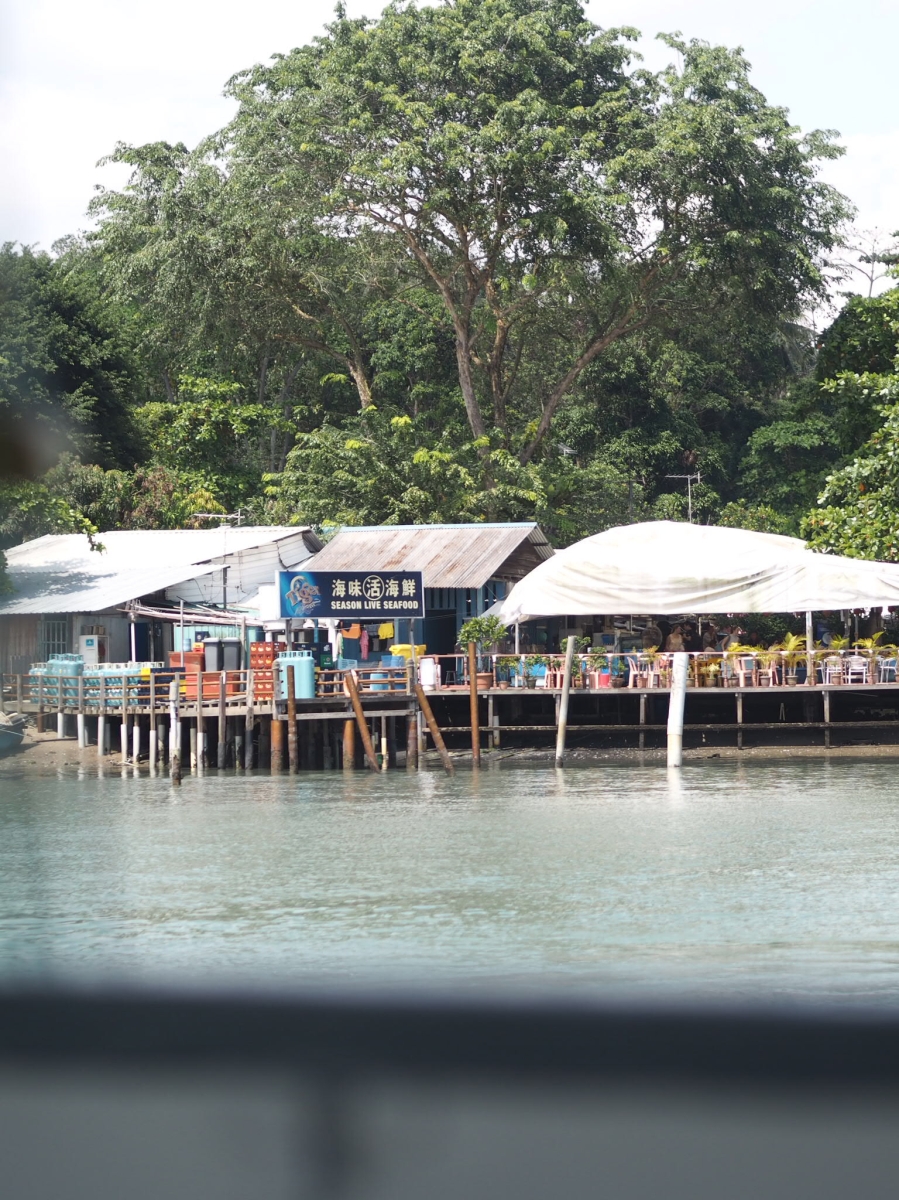 I remember my very first trip to Pulau Ubin because it was on New Years Eve 2017. It was a rainy day and we were newbies to Singapore. Our friends invited us for a day of cycling, we were a bit daunted as we had no idea what to expect. We stocked up on bug spray, put on our trainers and met at Changi Point Ferry Terminal. Now since then we’ve been a fair few times and it’s become a favourite day out. 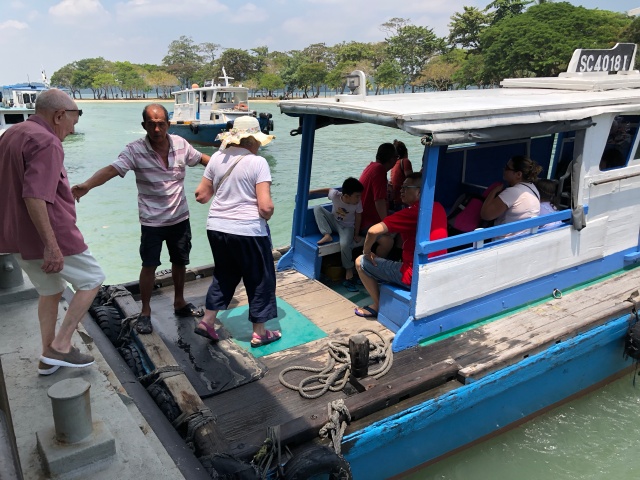 So I wanted share some of our highlights, and some we’ve yet to explore too. But this little island really does have a lot to offer. If you’ve got a few days in Singapore I’d recommend fitting it in and getting away from the tourist crowds and only a short 15 minutes on a boat ride from mainland Singapore.

When you arrive and walk down the boardwalk one of the first things you’ll spot is a little street packed with bike rental shops. Don’t expect anything fancy on this little island but bike rental will only be $7-10 SGD per person. Riding around the island is the best way to see it, in my opinion. You’ll be pleasantly surprise to find wide tarmac roads to ride on with only small gradual climbs through the jungle.

The bike shops have anything from little kids bikes up to tandems bicycles. Do be wise, cycle up and down the road and check that your gears and brakes work. I speak from experience as I may have once done a whole ride stuck in one gear, hills and all. If we’re going in a group we try and spread out and give all the shops a bit of business. 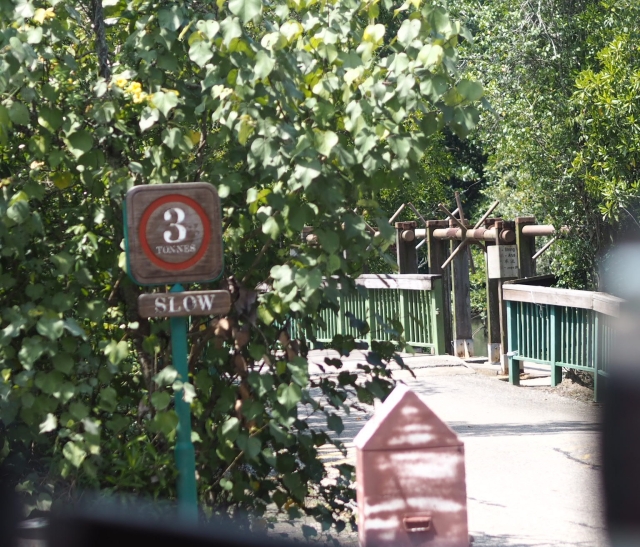 If you’re travelling with little ones you can get a bike seat too. We always take our own cycle helmets with us. Not to be a pessimist but I once had three mountain biking guys wipe out just behind me when a large palm leaf tumbled onto the road and blocked their path. Also if you’re bringing your own bike there is a bike wash, just as you come back into the village, with a jet wash. Watch out for the wild boars as you cycle, they’re often in the undergrowth at the side of the road.

Tip: Ask for bike basket to put your bag and map in.

Or Take a Taxi 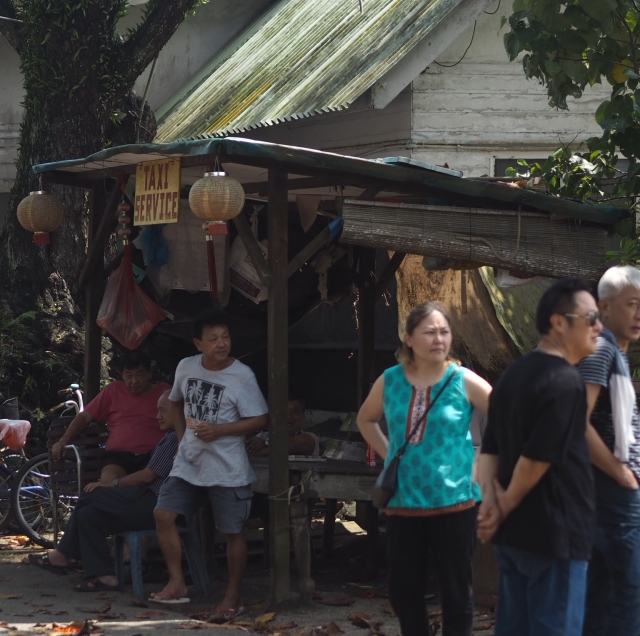 Riding a bike or hiking isn’t the only way to see the island of Pulau Ubin. As you come off the jetty there is a quirky little taxi rank. It reminds me of the ones I saw years ago in the Caribbean island of Antigua. For $60-80 SGD you can get your own mini bus and driver to take you around the island for a couple of hours. We did this when my parents and in laws were in town, at the same time and it was brilliant. The driver became our own tour guide and took us to all the hot spots but with air con and somewhere to leave the bags.

Sights to See on Foot / Bike / Taxi in Pulau Ubin

Butterfly Hill – if you’re cycling around you could wizz past and miss the magic on this place. I suggest you park up and wander around the hill that attracts more than 140 types of butterflies. Spot the Black Veined Tiger, Common Bluebottle and even rarer ones like the Dwarf Crow.

Pekan Quarry – Pulau Ubin means Island of Granite and whilst they no longer mine for granite, this quarry is now filled with water and wildlife.

Tip: I’ve not seen it here but I have it on good authority that the rare Oriental Pied Hornbill lives in the trees here. 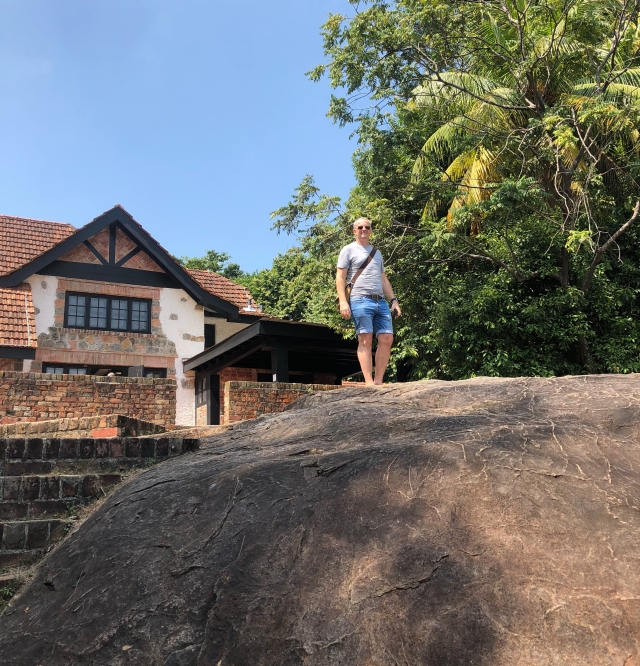 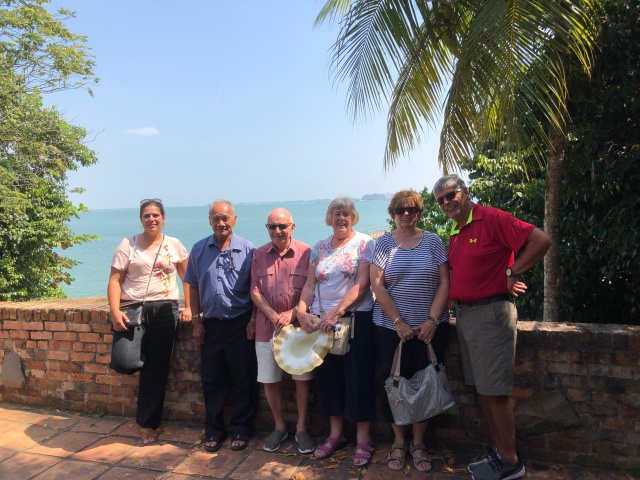 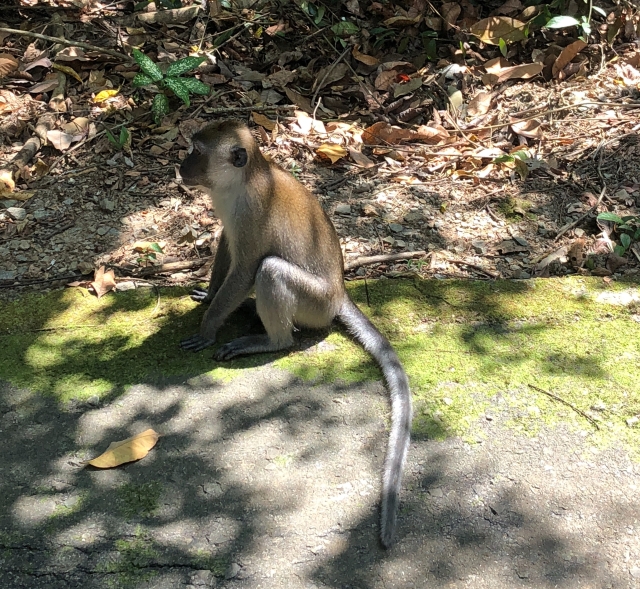 The Visitor Centre / House No 1 – on the East of the island is a tudor styled house which was built in the ’30s and restored in the early 2000s. It’s now an exhibition space which you can wander around and find out about the history of Pulau Ubin and the Chek Jawa wet lands or walk out onto the viewing jetty.

German Girl Shrine – within the mountain bike park sit a German shrine. I’ve heard two different folk lore around why it’s here… the first… There were once a German family who live on the island and managed a coffee plantation but when the island was invaded the 18 year old daughter fled, she went missing but was later found dead. The second lore is that when the British rushed onto the island at the end of WW1, the girl fled in fear and slipped and fell to her death in the quarry. But either way she is buried on the site and people come from near and far to offer joss sticks and prayers. 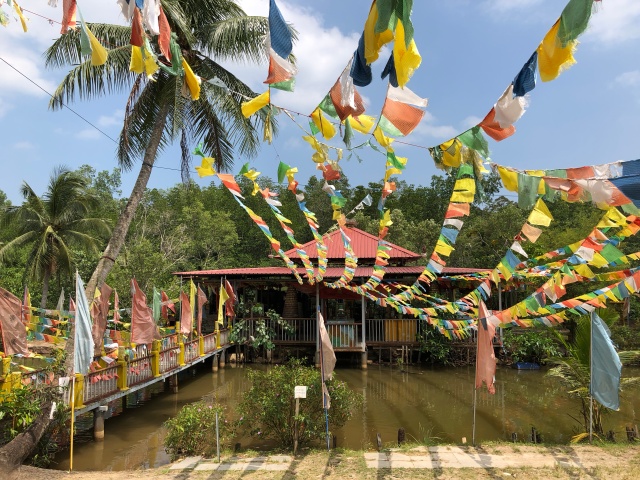 Wei Tuo Fa Gong Temple – this 80 year old temple sits on a small hillside overlooking a pond filled with turtles and catfish. The surround area is adorned with prayer flags. (If you’d like to know more about prayer flags I found a good blog post here)

Ketam Mountain Bike Park Trail – probably not for the faint hearted but there is a serious mountain biking trail to the west of Pulau Ubin. Trails seem to be well labelled. 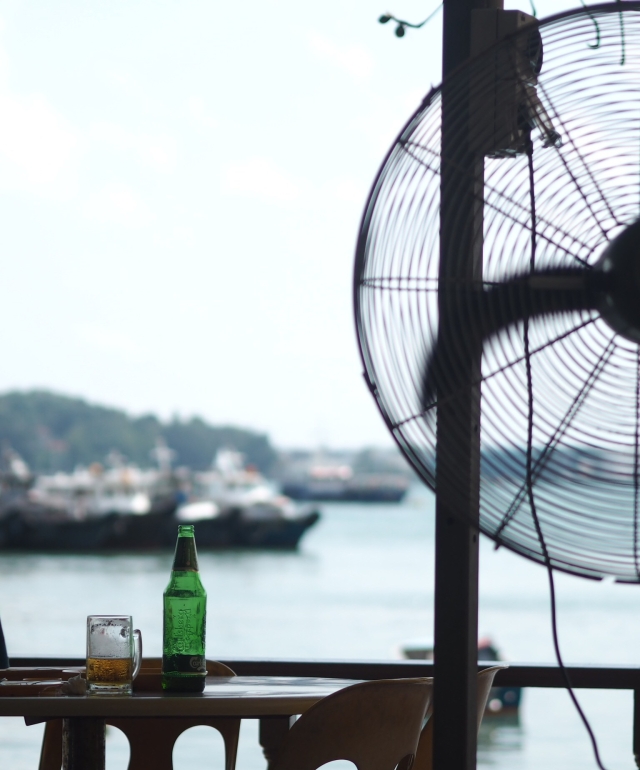 Season Live Seafood – this is the only place we’ve eaten on the island but the beer is cold, the food comes quickly and the prices are reasonable. (Closed on Tuesdays)

Tip: it’s not on the menu but you can ask for plain rice too. 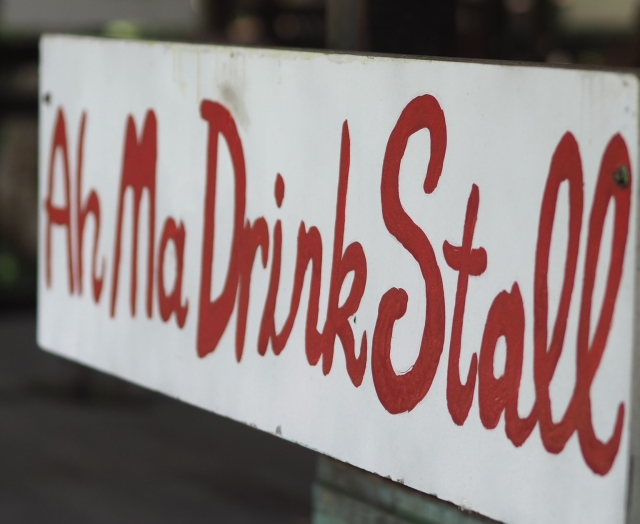 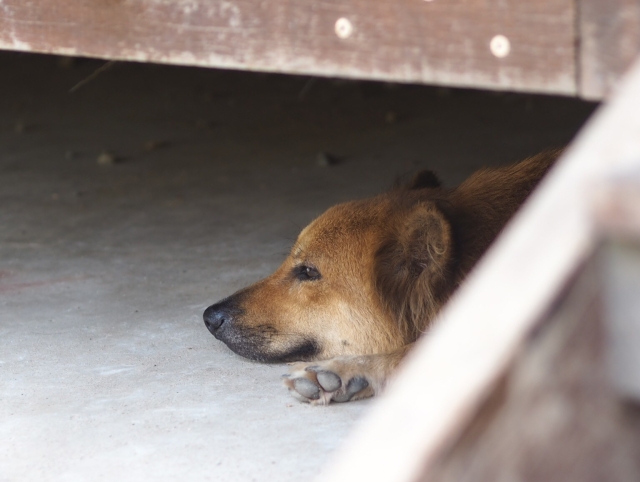 Ah Ma Drink Stall – out to the west of the island is this little refreshment stall complete with island dogs basking in the shade.

First Aid Kit – I always take a little pack of plasters and some first aid items wherever we go but especially here. It seems that someone is always falling off a bike and needing patching up when we’re there. It’s amazing how a plaster can heal most tears.

Pack a waterproof bag and rain macs – it’s still Singapore and those topical storms can blow in quickly. Likewise, take caps and sunscreen.

Cash is king – this little island is behind the rest of Singapore and does not have any atms whatsoever, all the outlets only accept cash. So make sure you’re topped up before you get on the boat. There is a cash point near the Changi Village hawker centre.

How to get to Pulau Ubin 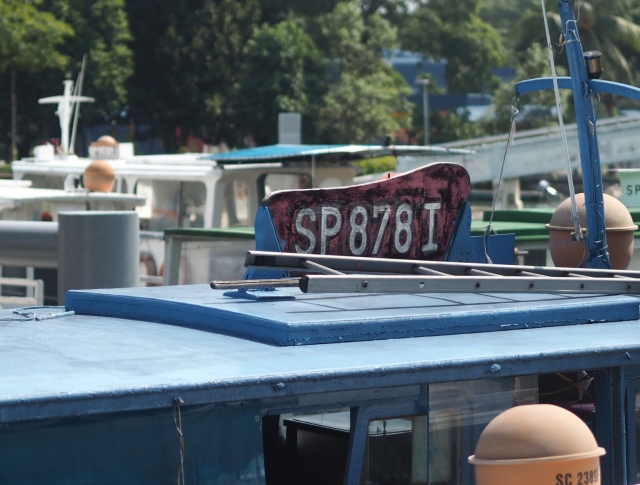 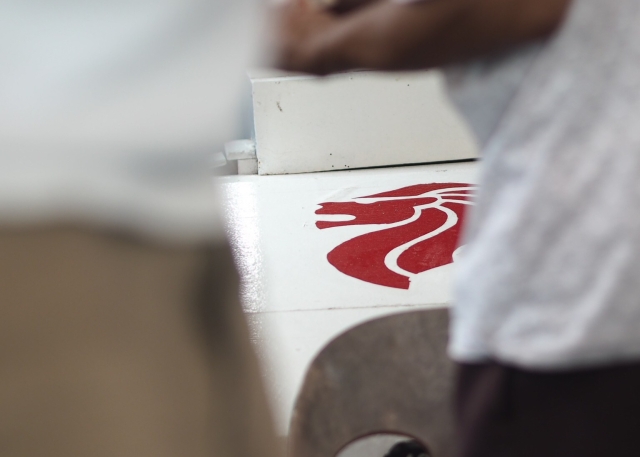 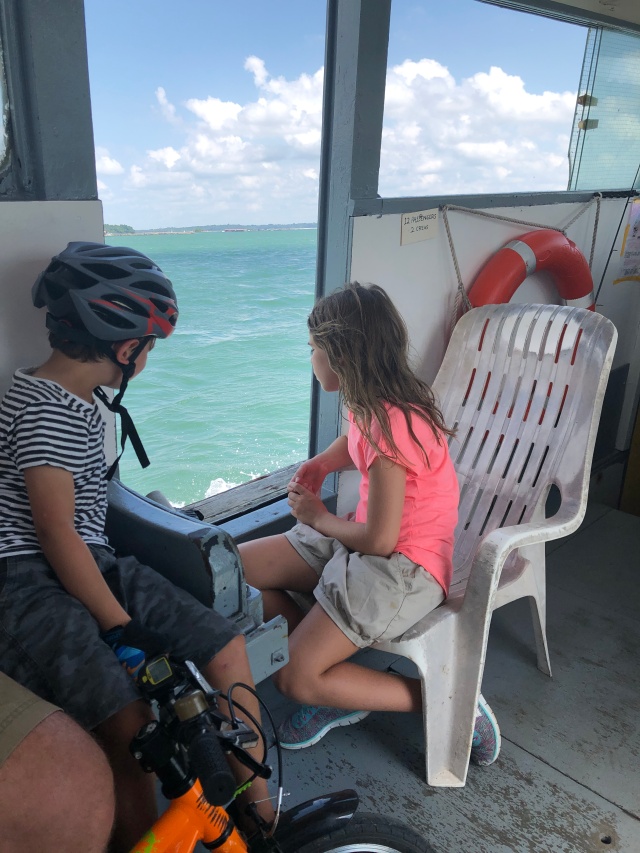 Head to Changi Point Ferry Terminal (not to be confused with Changi Ferry Terminal) and go down the stairs to the terminal. The bum boats run everyday 5.30am-9pm. Now they don’t run to a schedule, the conductor will wait for 12 people to fill each boat before it sets off across the channel. But normally it’s no more than a 5-10min wait max. The fee is $3 per person each way for the relaxed 15 min journey and you pay the driver directly once you’ve boarded. If you want to bring your bike along its an extra $2.

Other Things to do on Pulau Ubin

If you have the urge to sleep under the stars and get back to nature there are two campsites on Pulau Ubin; Jelutong and Mamam. I understand that both have ‘facilities’ but Jeluting is the only one where you’ll be able activate your inner caveman and light a campfire to roast your marshmallows on. When you arrive on Pulau Ubin you’ll just need to stop by the Police Post to let the island’s officials know about your planned stay.

2. Chek Jawa Wetlands – there are 1.1km of boardwalks to explore. If you hit it at low tide you’ll be in for a treat to see the coral reef, mud skippers and other sea living creatures.

3. Jejawi Tower at Chek Jawa – next to the wetlands is a tower where you can climb the 120 step to see the panoramic views over jungle of Pulau Ubin, the Johor River and the wetlands.

Tip: take your binoculars along for a spot of bird watching.

4. Kayak through the mangroves – the most popular company I’ve spotted giving tours around the waterways of Pulau Ubin is Adventures by Asian Detours. They offer 4-hour tours from the age of Seven.

5. Puaka Hill – now we’ve not climbed this as I’ve heard its somewhat treacherous, but if you’ve got your hiking shoes on you should certainly give it a go. The views over the quarry and Pulau Ubin from the top are meant to be breathtaking.

Beaches and shophouses basically my life at the moment till we can travel again and I’m only a little mad about it. Dreaming of endless European summers though with brighter evenings, cool mornings, fresh produce at the market, cheap wine… soon soon 🔜 hopefully x #covidcandoone
Went out for dinner with the girls last night. Was so much fun to giggle, chat and catch up. But alas Singapore goes back to groups of two next week unless you’re vaccinated 😒 feels like so many people are escaping, moving back home, moral is low here as we feel like we’re moving backwards. How you doing?
Been a minute Instagram. Beach, eat, sleep, repeat 🤷🏻‍♀️
Cake baking went well yesterday. The apple crumble cake was a hit. I also can’t stand having too much in the house so redistributed the left overs amongst some of our neighbours. It’s the upside to condo living that there are always people around to take cake off your hands 😂
Went shopping with my buddy today. Gosh it was good to get out of the house and off the island. Can’t wait for more beach time next week though.
I went out today. I got dressed, did my hair and then went to the dentist #covidlife 😂
The beach is keeping me sane at the moment. We go after school, before school at weekends and more. Home schooling is tough on everyone. Especially that we are working too. Hats off to all my friends in the Uk who did it through winter. You’re the real hero’s x
Spent a lot of time considering how everyone from the boat can all fit into the life boats #taleasoldastime #titanic
Watching my favourite people go up in this as I’m too chicken with heights 😂 but loving the sun flare that @themelias.co taught me how to capture.
When cruising to nowhere is the new going on vacation and you finally decide to give it a go.... just as covid has a mini spike in Singapore 🤦🏽‍♀️ timing is everything 😂 #cruisetonowhere
Gah we’ve signed off the designs on the table. As a libra this is a challenge. We went solid legs in the end, 240/96/75cm in dimensions. Now hoping it’s not too big and will fit into our lift come delivery day. Now to sit patiently and wait till start of July whilst @tableguysg works his magic 🪄
When my lovely friend @adams2jones asked if I wanted to join her to taste gin, I was ready in a flash (well maybe only five mins last instead of ten) but I feel like I need to share this little gem with you as I was super impressed, not only with the gin but the talented ceo who showed us around and the cool interiors. I’m defo popping back to and booking into their gin making classes yum 😋 #gintasting #expatinsingapore #expatadventures #thebrasslion