We stopped in Hue during our Vietnam trip as we wanted to add some history to our trip (we did two nights). When planning our trip we all added things we’d like to do; Alex wanted to adventure, Vics wanted history, I wanted to soak up the local culture and my hubby, Simon, well he needed a good break.

So the stop at Hue was for Vics, its the old capital and apparently used to be smack bang in the middle of Vietnam. We stayed in a quiet resort about 40mins out of town, up near the natural hot springs, which offered cute thatched chalets and bikes to get around the resort. 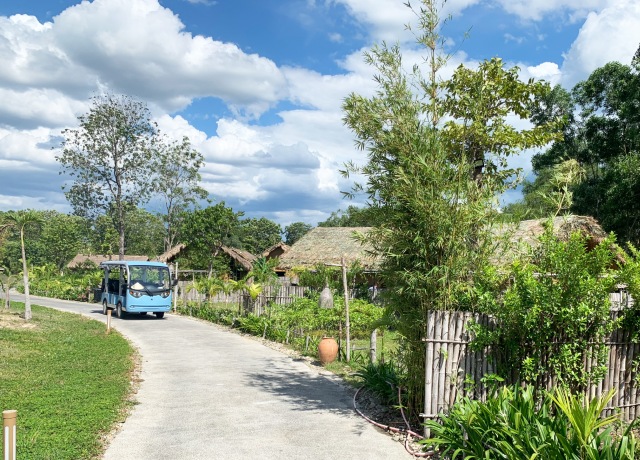 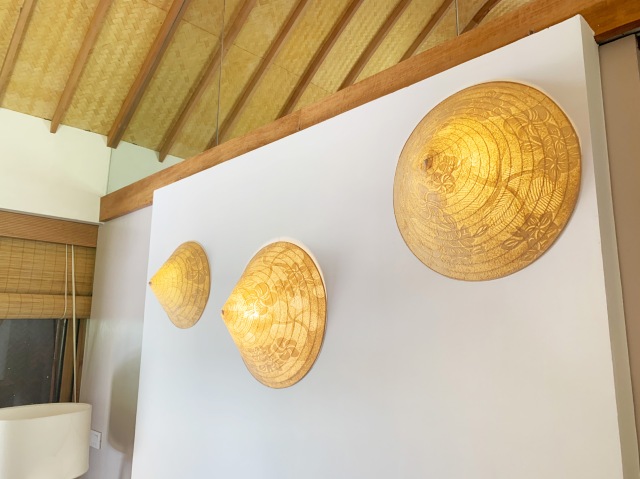 Alba Wellness Resort By Fusion was really unique, they had tapped into the natural hot springs in the area and one half was a resort catered to tourists and the other (which we hadn’t known about prior to arriving) was through a red gate and aimed at the local Vietnamese market and was more affordable. Where locals could opt to stay in cute tree house platforms and wooden huts on that side.

They’d set about to make the resort affordable for everyone to enjoy and included the locals. It was really magical. One of my favourite moments was being taught to count to ten by some local Vietnames kids whilst in the pool and they practiced their English skills on me. On the flip side we stayed in a two bedroom chalet, with out own cute garden overlooking the pool (which featured a swim up bar).

The real plus to this resort being that each adult got two complementary spa treatments and an Onsen for each day of their stay, oh yes, now this we were going to take advantage of! The spa was stunning and I had one of the best back massages I’ve ever had. They used hot bamboo sticks, it killed (in a good way) and it really released the tension in my shoulders.

The only thing which let this resort down was their food and wine. I’m not the easiest to cater for being veggie and gluten free, and to point out the others in our group enjoyed the food more than me. But I think it was a big fail that they had run out of all their cheaper bottles of wine, apparently this was due to changing supplier. 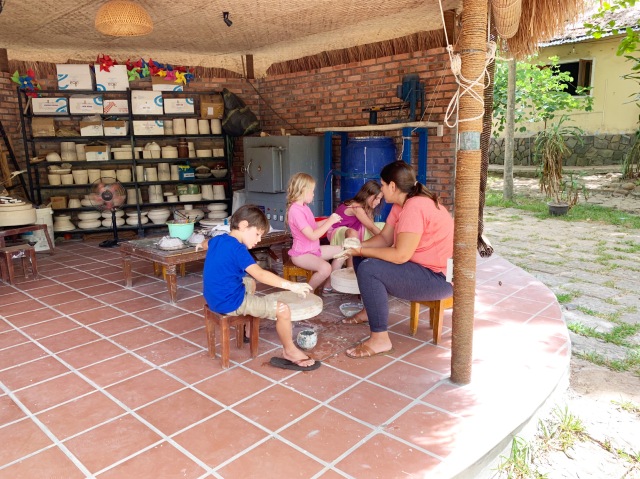 They had so many activities to keep you occupied and we could’ve easily spent five nights here. I snuck off to join their yoga classes by myself both mornings and took the kids to the craft village to make some pots. There was also a huge zip line and tree top climbing, but we ran out of time.

Back to the imperial town of Hue. We took the resort shuttle bus into town and picked up an electric extended golf buggy to drive us around town for a few hours. It meant it was easy to hop in and out of and the kids loved the novelty. The guy spoke no English but a bit of Google translate, a few wrong turns and we were all good.

I was amazed at how big the imperial town was, sadly we didn’t manage to cover it all in our short time there, as it’s huge! You can pick up audio guides at the entrance which I recommend to keep the kids entertained. It’s inspiring to see that they’re trying to restore as much of it as possible and rebuild after a big percentage was bombed during the war.

But my favourite part was wandering around the gardens and seeing the arches which were built to accommodate all the elephant traffic. Now we didn’t see one elephant in our time in Vietnam and I’d love to know at what time did elephants stop being used for transport?

In short if you can fit Hue into your schedule I’d recommend adding it in. The kids loved this stop and even enjoyed walking around the imperial city. This week it’s feels like the Singapore collective let out a big sigh. We finally are done with checking in and out everywhere we go, no more masks outside and my favourite is no more group size restrictions. 🥳
It takes a certain type of person to embrace being an expat. You leave behind your friends and the culture you grew up in to start completely afresh somewhere new. But in time your new life becomes the new normal. You set up your support network, the kids settle and you make friends.
Yup that’s our Christmas tree rocking out on the balcony all year round. #sunset #sentosacove #sentosasunset #momentsofcalm #happyplace #timeforcocktails
Ah the staycation that wasn’t to be. C-vid is a real rollercoaster. We arrived at a hotel last weekend and I was sent away due to restrictions. We got our dates mixed up and that was that. All the rules are becoming relentless and hard to follow here in Singapore. So instead of some down time and bonding with my family I came home and had the place to myself, even the dog was off on a sleepover. I was gifted a night of sleep and slept till 8am. Bliss. #lookingforthesilverlining
I should’ve been on a staycation this weekend, I should be at the hairdressers this week, I’d like to go on a boat trip for my friends leaving party 🎈 all things I’ve been refused due to covid-measures in Singapore. The universe is messing with my sanity at the moment.
I know we’re super fortunate to live where and how we do but after two years on this little red dot I’m screaming to be let out (and back in) I miss adventuring with my family. The person who used to adventure all the time feels like a lifetime ago. How much longer c-vid? I’m done with you.
Saw a guy in the pool this morning swimming with a face mask on, he’d cut holes for his nose and mouth, now either he thought it would protect him from c-word or he didn’t want to catch any sun. Either is possible during their weird times 🥴
Happy Friday 😊 currently sat praying that the landlord approves the cost to get the aircon gassed so we can all sleep tonight 🥴
Filled up my memory card and now need to find an external hard drive for my pictures. Any recommendations before a trawl Amazon?
Happy new year. Clocking off for the day to enjoy some Chinese New Year festivities.
Practice, practice, practice. Loving working through @themelias.co photography course this month.
Just like that we’re back to home schooling. Kudos to my son’s teacher who answered most of the kids queries today while laid back on a sofa on the iPad, 😂 chewing gum, can only imagine he had a bottle of gin off screen. 🥴 #onemoreweek when will homeschooling end. Told my mum how lucky she was that she got through my whole education without having to be my teacher 😂